In the midst of laughter and tears the life and creative talents of Bebe (Anne Elizabeth) Butler were celebrated by over 100 of her colleagues, friends, family, and fellow meditators on Saturday, November 26, at the Tampa Brahma Kumaris Raja Yoga Center. 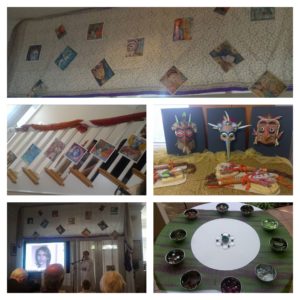 A puppeteer’s puppet stage decorated the front of the room and Bebe’s artwork adorned every wall and corner. Handmade masks were displayed in the back room. Sister Shireen and Sister Helen warmly welcomed everyone and created an atmosphere where the audience experienced being wrapped in a blanket of love.

Eloquent, loving tributes in many forms–video, song, pictures, creative works of art and meditations revealed the multifaceted lenses through which Bebe inspired, delighted, and uplifted others and was inspired, delighted and uplifted in return.  One by one co-workers and friends honored and shared memories of Bebe. Widespread, they mentioned their relationships being 20, 25 and 30 years old. We learned of her unwavering and determined nature, her playful and fun character, her talented and creative disposition, her intrinsic spirituality and her explorative and adventurous outlook. One testimony after the other filled hearts with the awareness of the angelic-like love with which she moved through life and the insight into how Bebe brought so much sheer delight, joy, and wisdom  to her every creation. Having designed so many creative works in the form of art, masks, original meditation commentaries, and much more one was left wondering if Bebe operated in the 24-hour day that the rest of us do.  Her life and works have impacted so many on a very profound level and will continue to do so.

Of special note were two videos. The first, prepared especially for this memorial by a fellow meditator/artist from Delray, Florida, skillfully showcased highlights over Bebe’s lifetime.  Bhavnaben’s beautifully done video of Bebe’s life moved the audience to smiles, laughter and loving tears.

Towards the end of the non-stop, two-hour program, Country Fried Tofu Girls video starring Bebe & Helen served as “comic relief.” The video, made a few years ago in celebration of 30 years of the Brahma Kumaris meditation service in Florida, reminded everyone that although Bebe applied herself very seriously to her spiritual studies, poking fun at herself was not off limits.  In fact, Sr. Veronica, Director of the Brahma Kumaris of Florida, reminded everyone that like Bebe, God, too, has a sense of humor.

Prior to passing away, Bebe made a special request that friend David sing at her memorial service.  Although he was not able to attend in person, special efforts were made to fill that request and a recording of his voice beamed throughout the hall.  Remarkably, that recording which was made several years ago, also featured Bebe singing in a voice imitating the voice of a young child. 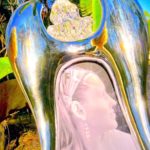 n the tradition of the Brahma Kumaris, each guest received a beautiful blessing card and a sweet cooked in Yoga along with a meal. The blessing cards created by Yolanda from the Naples Center were inspired through a special meditation experience and guidance in remembering Bebe. The wings of the angel with the backdrop of nature and Bebe’s picture in between the wings was printed for the blessing card. Along with toli and the blessing card, we received a cherished CD of Bebe’s meditations. 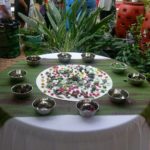 Guests were invited to participate in the creation of a mandala of a variety of stones and art pieces by placing a stone in this creative circle of love while holding a pure wish and intention for Bebe.

To close, we mingled and ate a meal of delicious aromatic foods.
We heard it said by one of the yogis that it was as if God searched for a “perfect angel” and his gaze landed upon our dear friend Bebe. Bebe’s original meditations are featured on the website called “Release Your Wings” and now… Her wings have been released for her to fly free. 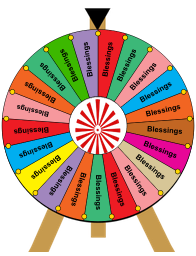